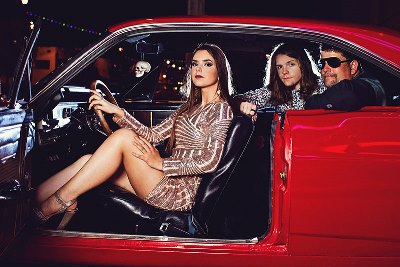 There’s something about Texas. Open up the history books and you’ll find the Lone Star State at the eye of every rock ‘n’ roll storm. Pull up a stool in any bar-room and you’ll still hear Southern gentlemen spin stories of ZZ Top, Johnny Winter and Stevie Ray Vaughan. Now, tip a ten-gallon hat to the bandleader writing her own name onto the state’s famed back pages, as Ally Venable releases breakout third album, Texas Honey – with production from another local hero, Mike Zito.

She might only be hitting her twenties, but long-term fans will know this isn’t Ally’s first rodeo. Influenced by local legends like SRV and Miranda Lambert, and blazing a trail across the US South, Ally’s early albums No Glass Shoes (2016) and Puppet Show (2018) won acclaim, awards and Top 10 placings on the Billboard and iTunes Blues Charts. But it’s all been leading to Texas Honey. Released alongside her appearance on the 2019 Blues Caravan, Ally’s Ruf Records debut went down at MARZ Studios in Nederland, Texas, where producer Mike Zito turned the killer songs in her back pocket into the album of her career.

Expect some sweetness – and plenty of sting. Opener Long Way Home sets the pace, fusing a twanged riff, white-hot solo and anthemic chorus. One-Sided Misunderstanding pairs a reflective verse with an overdriven chorus, before Running After You offers a bad-tempered buzzsaw riff and a lyric that tells it straight (“If you want to leave then go/But just know I’m not running after you”).

Broken has a gritty verse that builds to a knockout chorus, while Blind To Bad Love is a moody half-time strut that finds Ally caught under the spell of a bad lover (“I’ve tried everything to get you out of my head”). The title track serves up a growling riff and a solo that races the length of the fretboard, while White Flag is positively vicious, with a distorted vocal, scything licks and sneered solo. Nowhere To Hide has an irresistible pulsing groove, while Come And Take It welcomes Eric Gales to the studio, the pair trading vocals over stormy guitars.

Finally, on an album of all-original material, Ally tips her hat to the greats with a grooving cover of Careless Love Blues and a love-letter to SRV on a mojo-packed Love Struck Baby. It’s the cherry atop the first great breakout record of 2019 – from a Texas legend-in-waiting with everything coming her way. “I’m very grateful,” reflects Ally, “for all the cool things that have happened, are happening – and will happen…”