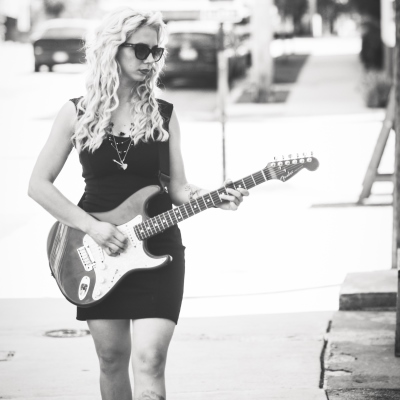 Introducing Vanja Sky – the newest discovery by Ruf Records. Hailing from the Croatian capital of Zagreb, the singer/guitarist is part of the next wave of hungry, up-and-coming musicians from all corners of the globe who are diving into the blues with passion and energy.

Sky picked up the guitar just five years ago, inspired by an evening visit to a live music venue near her hometown of Buzet. "It was crazy," she laughs. "There was a special energy in the air. I can't even describe it. I decided I wanted to play guitar right then and there – and when I decide something, I just have to do it." Jump ahead to the year 2017. Faster than she could ever have imagined, Sky is now making a record with some of the biggest names in the blues business. Her first stop is Bessie Blues Studios in Stantonville, Tennessee, the home base of Grammy-winning producer Jim Gaines. There, she records the sizzling, Luther Allison-penned roadhouse blues "Low Down and Dirty" together with fellow guitarists Mike Zito and Bernard Allison. A short time later, she reconvenes with Zito and a cast of experienced session players to record another eleven tunes. The result is her debut Bad Penny – an album of modern electric blues with a straightforward, rock'n'roll attitude.