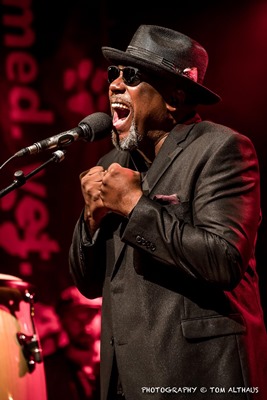 No matter where Big Daddy Wilson travels on this big, beautiful, mixed-up planet of ours, he takes the South with him.

For more than two decades, he has been carrying his message of hope and unity to each and every show, whether in New York, Paris, Auckland or – in the case of his new live album Songs From The Road – the village of Rubigen in central Switzerland.

The concert recorded at the Mühle Hunziken exemplifies Wilson's uncanny ability to connect with an audience. The key ingredients are honesty, his natural charisma and the sheer power of his voice. This performance from the fall of 2017 is a testament to just how far the American ex-pat and former soldier has come since answering a newspaper ad and summoning the courage to sing "Stormy Monday" for a group of young German blues musicians way back in the 1980s. He's ably supported by a tight and versatile four-piece unit comprising Cesare "Smokestack" Nolli (g), Paolo Legramandi (b), Nik Taccori (dr) and Enzo Messina (k). "I tried to give my listener a small view of the journey, the good, the bad, the highs and the lows," explains Wilson in the liner notes to the album. As usual with the long-running Songs From The Road series, there are visuals as well. The accompanying DVD in the two-disc set includes 15 songs in all and offers a good long look at Big Daddy Wilson in action.

Songs From The Road delivers some pretty strong evidence to the contrary. And yet, in a certain way, he's right. Wilson's music – like Wilson himself – is real. It's honest. At no point is this man ever putting on a show. "I’m just interested in singing, getting my message out and feeling the people – and hoping I can make them feel me."